The Vision-Aid team is proud to share the success story of Nibin Mathew, whose dedication and determination is an inspiration. A chain of life-changing events has fuelled Nibin's efforts to spread his technical training to the visually challenged from his region in Wayanad, Kerala. Born into an agricultural community in Wayanad, Nibin had lost his vision to glaucoma in 2012. He underwent several eye-surgeries at the Aravindh Eye Hospital Coimbatore, gaining limited vision. Due to lack of adequate support for STEM education (Science, Technology, Engineering and Mathematics) after the tenth grade, Nibin pursued study in the field business and finance till twelfth grade. He obtained bachelors degree in arts and humanities thereafter. Nibin was part of the 2018 batch of aspiring Python programmers trained by Vision-Aid. He went to participate in the 2019 Inclusive Hackathon organized by the International Institute of Information Technology Bangalore (IIITB) as part of the Vision-Aid team. This annual coding fest is geared towards showcasing the technical and creative skills of visually challenged coders in expanding the field of digital assistants for the differently abled.

Post the Hackathon, Nibin and his friends rallied to organize a half-day workshop: the Tech Assistance Program (TAP) for 30 visually challenged graduate students in Kerala. The Program spread information about technical support for e-learning, self-learning through MOOCs (Massive Open Online Courses) and generating ideas for the Inclusive Hackathon. In April 2019, Nibin collaborated with the Education Department of the Government of Kerala in resourcing and training 50 teachers in Wayanad for instruction of the visually challenged. Participating in the Hackathon opened new avenues for Nibin in terms of higher education. He has since applied and qualified for a Master's Degree in Social Entrepreneurship at the Tata Institute of Social Sciences (TISS) in Mumbai as well as a Master's in Digital Society at IIITB, which he commences as of this year. Nibin is currently a Junior Clerk with the Indian Railways in Mumbai. In spite of his job responsibilities and visual impairment, Nibin gained Grade 3 proficiency in playing the violin. He was certified by the prestigious Trinity College London, a center for Fine Arts and the English Language. Nibin is a go-getter. He now intends to pursue a Master's Degree, taking a sabbatical from his job. Vision-Aid team will provide him with financial support for pursuing the Master’s Degree and would like to extend a request to potential donors to support his endeavor. 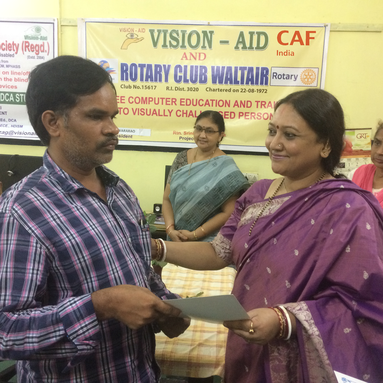 Born in a poor farmer’s family, the 36 year old Dhuli Apparao is the second of the three sons.His other two brothers are sighted and well-placed, whereas Apparao is 100% visually impaired. Life seemed very difficult for him initially, however, in the course of time he realised that life can be made better through education. Hence, he had a strong desire to change his destiny. His self driven-motivation to excel facilitated him to complete his Masters of Arts and Bachelors of Education. He thereafter tried to acquire a reasonably good job, but failed in all his attempts. He then realised there is something more he has to do. Upon researching on the internet with the help of his friend, he came across Vision Aid website.
Without any hesitation he placed a call with the vision aid personnel and got himself enrolled for DCA course as a beneficiary of CAP, India. He was always regular and punctual to classes and in due course of time, he completed his DCA course with a very high percentage. Shortly after that, he got selected as a Probationary Officer in IBPS and is awaiting the appointment order. Vision Aid remembers him as a very bright student, responsible and dependable. His leadership qualities were recognised, and therefore he was made the warden for the Vision Aid Hostel during his course of study. Of late, he married Ms. Kalavathi, a poor sighted girl and is now leading a happy life. He is much obliged to Vision Aid, India and CAF, India for the help extended. Vision Aid Congratulates him on his success !
Happy Kalyani and her mother at Vision-Aid India 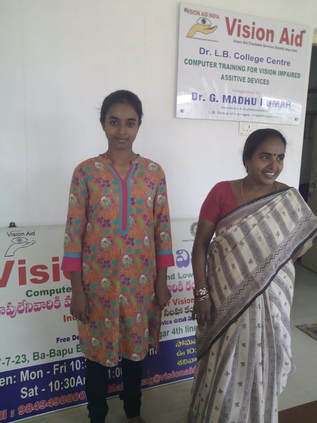 The situation being reported is a success story of Varanasi Kalyani, a 24 year old girl, who is visually impaired. She has completed her MCom through Distance education, however she was not able to secure a job. After her training at Vision Aid India by being covered by CAF, India, she’s now secured a respectable job as Junior Assistant at Collector’s Office.​
Ms. Varanasi Kalyani belonged to a lower middle class family. Her parents have given up on her as she started developing impairment in her eyes. Kalyani has a younger brother who is studying in class X in Narayana Techno School. Kalyani was a bright student during her schooling. Although she had fading eye sight, she successfully passed her X standard without taking the help of scribe. Later, she had immense will power which made her to complete her B.Com. Subsequently she joined Chartered Accountancy ( Company Secretaryship) and got through her preliminaries. Life took a bitter turn, soon her sight began to deteriorate and she had to give up the dream of completing the CA course. After she dropped out of the CA course, she joined M.Com through distance mode. Kalyani completed the course with flying colours with 77 percent. She thought there is no looking back for her but however she failed to secure a job after many trials.
Hardwork and perseverance along with the right training is what has brought a tremendous improvement in Kalyani in terms of acquiring the right skills needed to compete in the world today. Kalyani was depressed she wasn’t able to get a job despite her good education and hard work, however the training at Vision Aid has been a tremendous help. Today she is confident and sure of her future. The training at Vision Aid with the financial help extended by CAF, India has been very beneficial to Kalyani. She had great dreams for future. She dreamed of a beautiful future. She dreamed of securing a job to financially support herself. But her dreams deferred, she was shaken and shattered. Soon she realised there is no use of brooding over past misfortunes and failed attempts. She quickly enrolled in the course offered at Vision Aid and emerged successful. She’s now working as a Junior Assistant in Collector’s office. Right attitude with right training can set the track going. Kalyani’s parents Varanasi Gandhi and Varanasi Nagamani are happy parents today. They recounted that they had no hope for their daughter earlier. But they say that things are different today. They are very happy for their daughter and are thankful to both Vision Aid and CAF, India. Vision Aid Congratulates her on her success !
Jalluri Nooka Raju at Vision-Aid India
Jalluri Nooka Raju, a 24 year old young man had always thought that life can never be
promising to him. He suffers 100% visual impairment. There were times he felt dysfunctional
due to his inadequacy of sight. Nevertheless he told himself he would be able to conquer his
disability by educating himself. It was this determination and grit that propelled him to
complete his Bachelors in Arts and Bachelors in Education. However, Nooka Raju did not
see much progress in his career even after upgrading his qualification. It was then, that
someone told him about Vision Aid and the revolutionary computer education it has been
offering for the visually impaired and the life-changing transformation it is bringing in the
lives of the visually impaired. So without much ado, he joined the DCA course that is being
offered. He underwent the rigorous training at Vision Aid as a beneficiary of CAF, India.
He was diligent at work and never missed a single class. Eventually he passed the course with
a good percentage of marks, soon after which he got placed in a IDBI Bank as an employee at
Visakhapatnam Branch. He is extremely grateful to Vision Aid and CAF, India for helping
him lead a successful and meaningful life. ​Vision Aid Congratulates him on his success !
Site powered by Weebly. Managed by SiteGround